Check the availability of our rooms for the date you like to make your reservation. 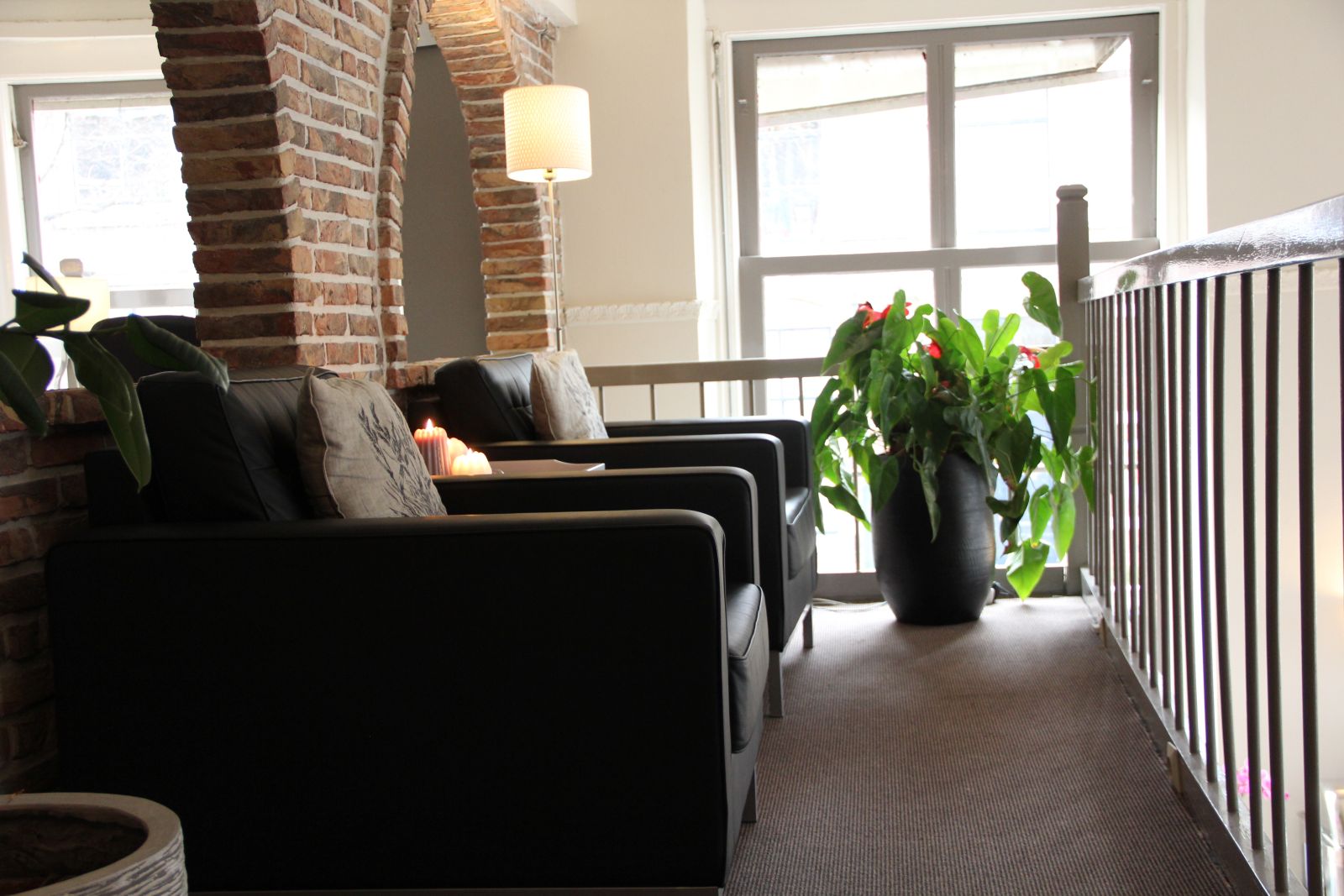 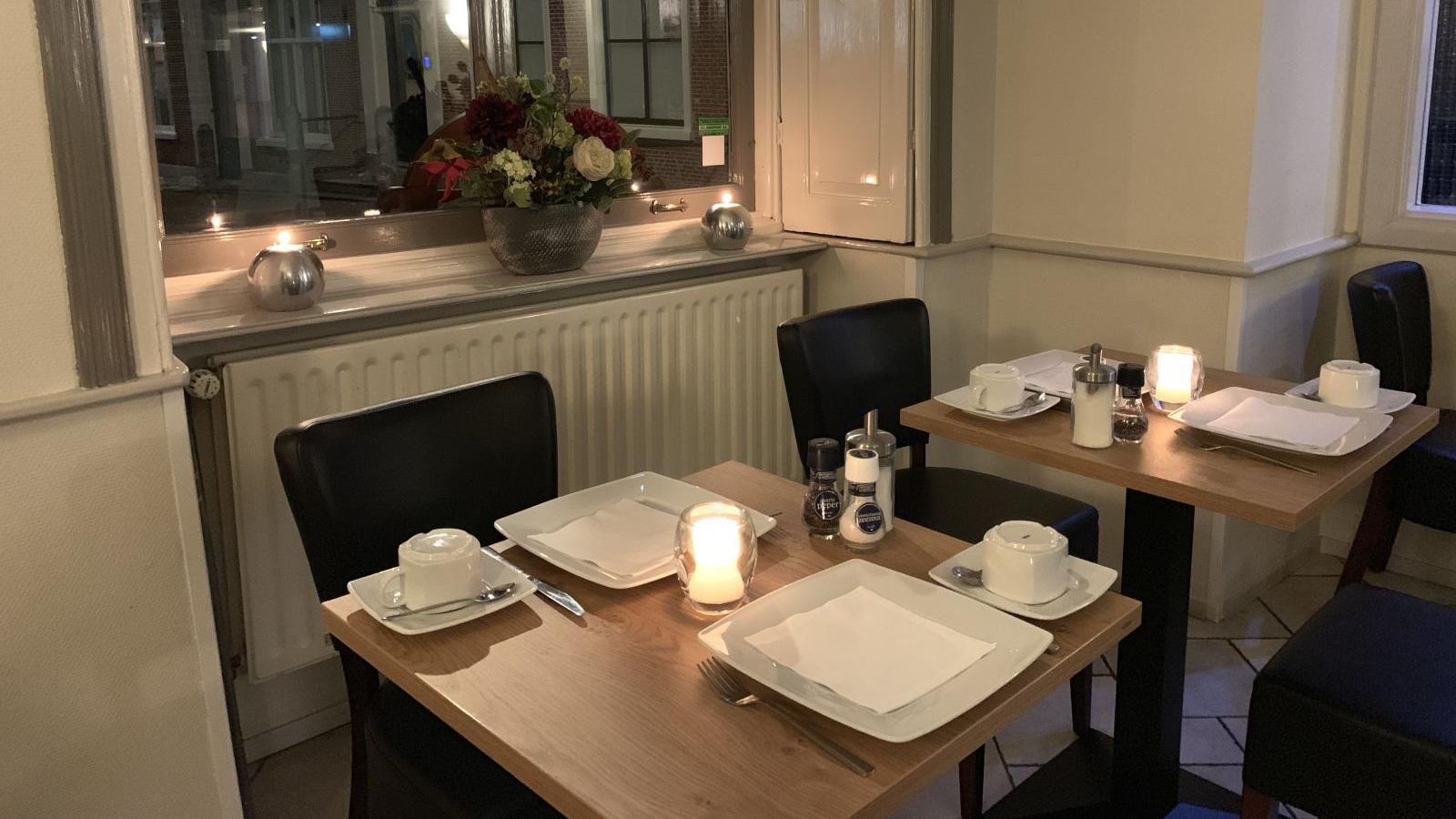 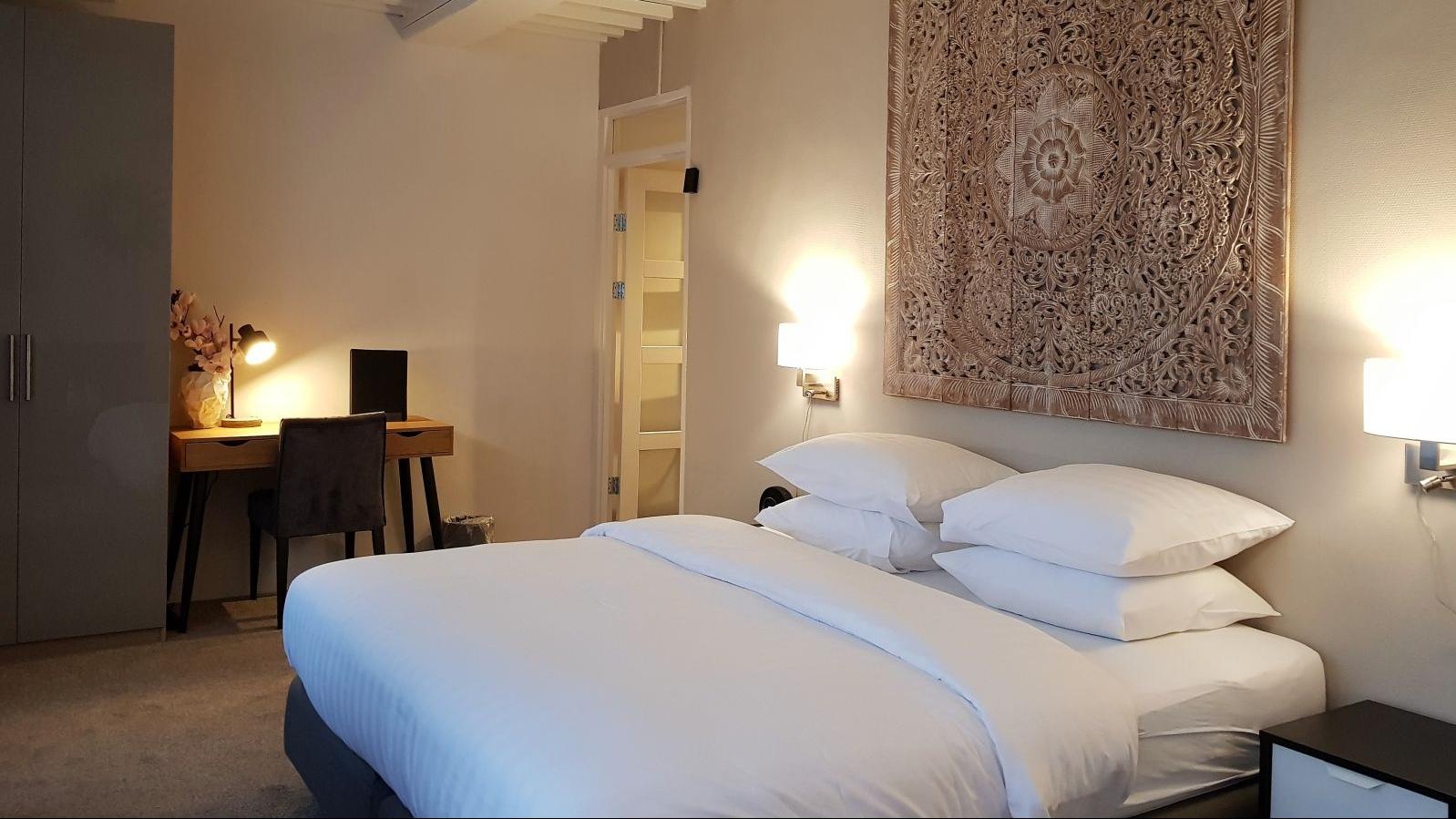 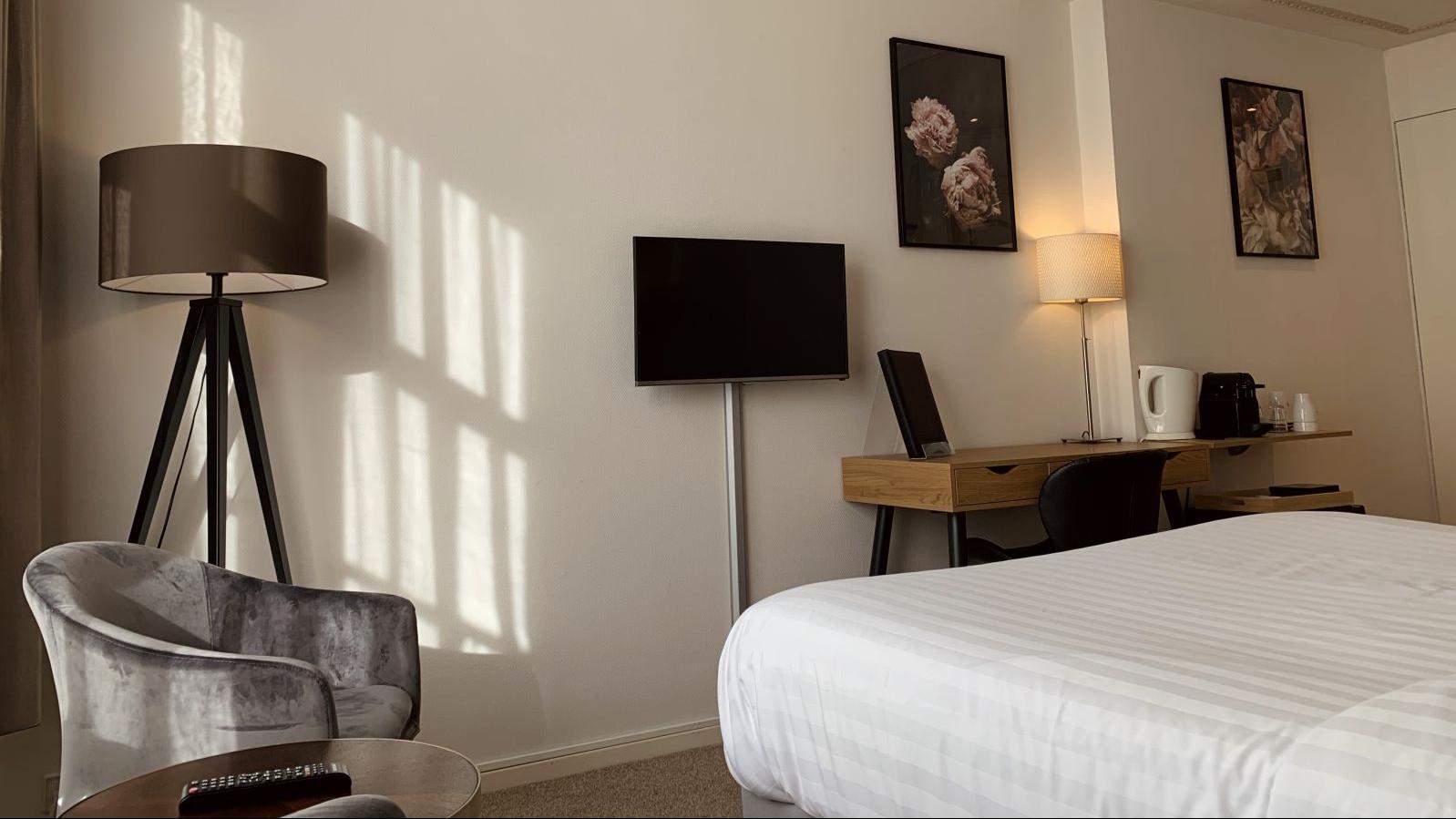 Hotel Grand Canal has a long and varied history, including as home, beer brewing and cigar factory but is a 3 * family hotel since 1995.

Around 1565, the building was built by Pieter Pieters Sasbout after whom the house is named “Home Sasbout”. Mr. Sasbout was time the mayor of Delft,brewer but also the founder of the courtyard of grace. When Mr. died in 1575 he left the property to his daughter Sijtge.

After the death of Peter Sasbout in 1575 the property was owned by his heirs. Among his daughter Sijtge Sasbout. From a tax register shows that the property was leased for 110.00 guldens a year to Jacob Huichz. Subsequentl, the property was sold to Antwerp fled cloth merchant Jacques Shot. His widow sold the property in 1593 to Arent Jansz, De Ouwe and Peter Anthonisz v.d. Hill.

From the register of 1600 it shows that the large property was now divided in three parts.

In one of them presumably still existing house on the corner of breestraat lived harbor master Pieter Anthonisz v.d. Hill. The second part was by Arent Jansz inhabited and De Ouwe  rented it to a certain Adriaen Cherlippis. The third part of the building that was in the middle of the street, still belonged to Sijtge Sasbout. This third part was later named around 1700 “Die Cleijne wereld.”

She was married to Peter Opmeer. This man was a well-known intellectual in Delft who during the revolt against Spain flee with his wife and children to the southern regions.

in 1609 Pieter vd Heuvel Anthonisz sold his share to Jan Cornelisz van Leyden. Those sold by order of creditors cloth merchant Daniel Cosson. This deed is the first and only time for this property uses the name “Die Weerelt”. He paid 4,500 guldens for this. On March 31 1631 by the municipality entered into an agreement with the company of Amsterdam cloth merchants to dread creations in Delft sheets.

In 1638 the whole operation went into a fiasco after this he has broken with the cloth merchants.

When in 1643 his wife dies he remarried in 1645 with the widow of Pieternella Bleys Wyck. After her death Hugo van Wyck Bleys inherits in 1663 the building on the Breestraat.

Hugo Bleyswijk became a member of the city council in 1672.

In that year when also the French invaded Holland governor Willem 3rd power took the power and replaced Hugo Bleyswijk. He performed the duties of ships until his death in 1682.

Then he left it to Mary Muijlwijck she died in 1716.

In 1732 the building came through inheritance by Johan Gael. Except that he was the owner of this property he was for many years mayor of Delft. When the family Gael owned this property it was occupied by tenants.

In 1793 family Gael sold the property to Cornelis van Duijn, who sold it quickly to Francois Beeldsnijder.

After his death the property was left to Ms Anna Susanna Bagelaar. After the death of Mrs. Bagelaar its assets were divided among the heirs. Miennette Storm-van Chijs was awarded the property to the wide alley. The Chijs family remained until 1908 the owner of the house. The house was partly due to their self and occupied by tenants. Finally the house was used as a warehouse and storage facility for van der Chijs Handels society.

From 1836 the house was rented. A set of tenants followed one another. In 1878 the building was sold to her cousin Mrs. James jr. Van der Chijs. After leaving the last tenants in 1891het building has become a storage warehouse and later N.V. van der Chijs Trading Company was located here. After his death the house in 1896 his son Jacobus v.d. Chijs Jr owned the house.

Firm of Chijs mainly dealt in tobacco and tea, but in 1908 they took out a mortgage on the property with the intention of making a cigarette factory.

Along with Frederick Hillen he was a company fabricating pastry and tea products. Different licenses where requested. In 1907 and 1908 there were major renovations to the façade, entrance and warehouse.In 1910 they placed a new door frame. Inside there are gas engines from 4hp and three electric motors came in 1913.

From 1916 the tobacco factory operated under the name “Chapchal Fréres” originally a Russian company with offices in St. Petersburg and Paris.

Only in 1921 the company will be officially named in the Dutch Government Gazette, with the founding date 22-02-1921. The company rebuilds the property into a real factory building with workplaces and production departments. Also during the war remains the fabric in operation. At that time a German man is appointed as a director of the factory. Following the decline in the tobacco industry in the 50’s the tobacco Fabric closed on 27-09-1961.

On 16-03-1955 a bronze plaque was unveiled for A.M.M. Storm V.d.Chijs her birth house breestraat 1. It was created by artist Marian Gobius, but during reconstruction the plaque disappeared. As the famous Delft photographer Rene vd Krogt had made a good photo in 1983 it was possible after the artist’s death to still make a second plaque. This was done by Mrs. Els Benjamins.

This plaque hangs back on the prominent place of the facade since 1999.

After the cigarette factory gates had closed his doors company TNO took over the property and established his department armed fiber.

After several years of using the property in 1967  there was a fire in the attic. The flames leaped meters high from the attic that completely burned down.

The firefighters used three water cannons due to this they could limit the spectacular fire to the attic. And they managed to prevent that full cylinders and chemicals that where stored there to catch fire.

The lower floors and the upstairs where destroyed by the huge amount of water.

After this disaster the attic was completely destroyed.

At the end of 1969 the building that was in poor condition was taken over by the municipality.

Two sections of the public works department, the civil service and to service in gardens where located here. After putting an announcement to find contractors that could restore the building there where allot of interested parties. Ultimately it was the firm of van der Berg / van der Klis BV to achieve the mission to get the building and the façade back in to the ancient situation.

Finally the new building was completed in 1971.

They soon discover that the building is too small to accommodate all services and move the departments to another location.

until 1991 the service will remain housed there until the new building is ready.

Next there is a series of new owners who have the property briefly in possession:

– Fa A Van Tol Management, which operates in the sector of trade and real estate.

– The municipal Marlot the owner administration sheltered employment in

The owner bought this property and what was totally stripped down on the inside.

We started with just  four rooms on the ground floor. From then we realized the first floor and after a couple of years the final and second floor was finished. The hotel has 18 cozy rooms all on the canal side. Since 2014 much has changed and refurbished. All rooms have undergone renovation and the common areas have also had their turn. The main renovations we had but an old building like this there is always something to renovate.